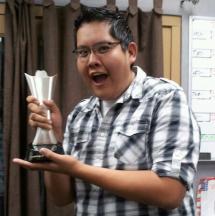 Fun Fact: I played violin for 8 years throughout school

Music was never meant to be a lifestyle for me, but rather somewhat of a hobby. I was raised listening to country music thanks to my parents and my older brother. Music from country legends like George Jones, Conway Twitty, Keith Whitley, Dolly Parton, Loretta Lynn, Tammy Wynette, and Johnny Cash filled our house on a daily basis. As I began to discover my own musical identity, I ventured into the amazing pool of music that the 90s brought us. CDs from artists like Terri Clark, Patty Loveless, Pam Tillis, the Dixie Chicks, Reba, Lee Ann Womack, Tracy Lawrence, Mark Chestnut, Clay Walker, and many more occupied tons of space on my desk and in my room.

As I grew older, I was fortunate enough to have amazing parents that would allow me to accompany me them to concerts. My earliest concert memories were getting to see legendary artists like George Strait and Alan Jackson as well as artists that were up and coming like Terri Clark, The Wilkinsons, Leann Rimes, and many more. To this day, I can still be found at nearly every country music concert that makes its way through Arizona. In fact, 2015 was a record year for me as I attended 27 concerts throughout the year, most of which were country concerts. So, it’s easy to say that country music has always been a huge part of my life.

In fact, ever since I was a little kid I have been fascinated by the country music industry. Everything from how an album is recorded, to how a tour is put together, to how record labels market new releases, to how radio works, to how awards are voted on, and a million other aspects of the industry have always captivated me. I can remember begging my parents to let me stay up past my bedtime so I could watch the CMA and ACM awards. Pretty soon, it became a tradition for all of us to sit around and watch the telecast together. As I watched, I never once thought about what it would be like to stand up on that stage to accept an award. Instead, I always wondered what it would feel like to have an artist thank me for helping them realize their dream. It’s safe to say that dream was never something I felt could be a reality.

I grew up in a suburb of Phoenix called Mesa. I was simply a normal kid that excelled in school. I graduated high school in 2007 and immediately decided to follow the path my family had laid out for me. I enrolled in the Accounting program at Arizona State University and began my journey to true adulthood. That journey quickly took a different turn when I realized I didn’t want to be an accountant. After giving up a full-ride scholarship, I decided it was time to follow my own path and dreams. Trouble is, I still wasn’t sure what those were. I began researching various avenues including culinary school and maybe something medical related. Both those options failed to light any sort of fire within me.

I didn’t feel that spark until a friend of mine suggested Music Business. Not knowing what that was, I immediately went to Google to find out. I read what the program entailed and the material it covered. Instantly, I knew this was what I wanted to do. A local community college offered a Music Business Associate’s Degree so I immediately enrolled in the program and began taking classes. Once I reached the tail-end of the program, I was ready to transfer to a university. I began researching schools and quickly narrowed my options down to two: Belmont University in Nashville or Full Sail University. After a lot of back and forth, I eventually decided to enroll in the online Music Business program at Full Sail.

Two years later, here I am with my Music Business Bachelor of Science degree and ready to begin my journey within the country music community. The past two years have lead me to some amazing opportunities like the chance to intern for a radio station, work in the marketing and entertainment department of the Toby Keith’s I Love this Bar & Grill locations, and be part of other amazing marketing and PR teams. I am extremely excited to see where the country music road will lead me from here.